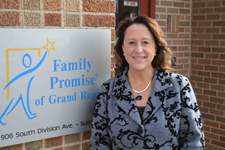 Cheryl Schuch is the executive director of Family Promise of Grand Rapids.For many people living in the Grand Rapids area, the Great Recession has become a distant, unpleasant memory. Others, however, remain gripped in the economic downturn's tentacles.

Financial hardship is an especially thorny problem for homeless parents who fear loosing custody of their children because they have no fixed address, according to Cheryl Schuch, executive director of the nonprofit interfaith ministry, Family Promise of Grand Rapids (FPGR).

"The number of families experiencing homelessness continue to rise even though the recession is over," said Schuch. "Most of our families are living below the poverty line. Jobs are coming back but many of them are low paying, temporary jobs so, for many people, there's still a period of no employment. They don't have (financial) reserves so they bounce from couch to couch each night."

That's the familial quagmire Grand Rapids native Effie Baniel found herself in when she lost her full-time job two years ago and eventually was evicted from her apartment.

A family kept intact because of Family Promise of Grand Rapids: Laiciona, mother Effie Baniel and Lacey.Baniel and her two daughters, Lacey, 5 and Laiciona, 4, were able to live with a relative for a time, but the added financial responsibility and disagreements ultimately led to Baniel's ousting.

"I was staying with my aunt but she eventually told me her bills were too high and my kids were destroying her house," said Baniel, 22. "I called the Salvation Army who referred me to Family Promise and we have been here since late October."

Since then, FPGR has helped Baniel find a new job, receive clothing, food and temporary shelter while she works to get back on her feet. She is now able to save money, which will be put towards a deposit on an apartment.

Plus, Baniel said FPGR has poured into her family's lives something beyond the necessities of life.

"If feels like this is our family," Baniel said. "I'm really enjoying my experience here. When I first got here, I was like a crybaby, nervous and scared. Now I really open up to people. My kids are happy because they know I'm happy and that's all that matters."

The first one is its Interfaith Hospitality Network, which involves FPGR partnering with 16 area churches that provide safe, temporary shelter for families for an average of 30 days, while FPGR works to find them a more permanent residence.

"The churches have their own rooms so families are not split up," said Schuch.

Then, another 22 churches develop a bank of volunteers, who furnish meals and activities for kids on a regular basis.

"That's really the core part of our mission," said Schuch. "This truly is a community-based program. The churches really believe in these families. They're truly sharing God's love in a most basic level. We have more than 2,000 volunteers from churches and businesses who help with our interfaith hospitality network. 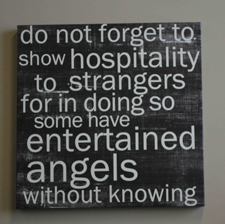 "All our volunteers are half-glass full people," added Schuch. "They really believe anything is possible and the future if bright. They really believe in these families. It's truly sharing God's love in a most basic, street level way. Family Promise allows these churches to focus on the same goal, which is hospitality without judgment, showing love and compassion and hope. That is what changes the path for the homeless."

FPGR's second core program is called Partners in Housing, which places qualified families in manufactured housing — 50 families so far in the last five years in Kent County. Manufactured homes are restored before former homeless parents purchased them for an average of $7,000. According to Schuch, 99 percent of those who bought a home continue to own it five years later.

The third core program is After Care, which builds relationships with newly housed families and individuals, to help maintain their independence and self-reliance.

The Reaching Beyond Initiative provides short-term rent subsidies and assistance with long-term case management to qualified families who are ready to move long-term into a house or apartment.

Finally, FPGR's furniture donation program collects household items from donors in the community and gives these to families as they transition into housing.

The summer months, between Memorial Day and Labor Day, are the most difficult time of the year for homeless families, when children are out of school and friends and families who provide a temporary place for them to stay grow tired of having kids in their homes or apartments the majority of the time.

As a result, summer is when "couch surfing" is common for homeless families who've worn out their welcome, particularly since children during the summer do not receive free or reduced meals from their respective schools, putting a strain on the host-family's budget, said Schuch.

Compounding the problem is demand to rent apartments is keen, making it all the more challenging for low-income parents to pay the rent even when they are working.

"An average two-bedroom apartment in Grand Rapids is $839 monthly," said Schuch. "We used to find rentals for $450 or more, now it's between $600 to $800. And the number of homeless people with children is significant. Some call it a tsunami of homelessness."

Plus, landlords have raised eligibility requirements for potential tenants, said Schuch, so people with bad credit and previous eviction notices are often passed over.

"Some landlords still work with us but for the most part any eviction or bad credit history and you're out," said Schuch.

FPGR has eight staff members that help a yearly average of 800 people. Of that number, 65 percent are children and 75 percent of the children are age 5 and under.

Pulling children out of the homeless experience is crucial, said Schuch.

"When a child experiences homelessness, so much of it is known as toxic stress," said Schuch. "It lessens the brain's capacity, causes health disorders and causes behavioral and social disorders when children live in a crisis situation. If we can't make the stress go away, we have a bunch of kids, including pre-birth children, living in a disadvantaged situation."

That's why it's critical for FPGR to promptly step in and help.

"We need to do it quickly and in a sustained way," said Schuch. "That's why the kid component is vital to our mission."

FPGR is affiliated with the Summit, N.J.-based national organization. Founded by Karen Olson, Family Promise (formerly National Interfaith Hospitality Network) has since expanded to 41 states. More than 160,000 volunteers and 4,500 congregations comprised of various religious faiths contribute to Family Promises' cause.

The FPGR annual budget is $625,000, which is derived from private donations from foundations, churches, individuals, businesses and community organizations.

"We provide a place of strength and excitement and hope and resilience," Schuch said. "They go to a church to stay that first night and that first morning are smiles and a sense of 'I'm OK. I'm safe. I'm not alone anymore,'" said Schuch. "They move from being scared to being empowered."
Author Information
Author: Paul R. KopenkoskeyWebsite:
About:
Paul R. Kopenkoskey is a full-time freelance writer and editor for an assortment of publications including Grand Rapids Magazine, Grand Rapids Business Journal, and Faith Grand Rapids magazine. He has completed his first novel with the working title, Karl Beguiled. He and his wife, Barb, live in Wyoming, Michigan. They have three children and five grandchildren.