Lisa Blystra: “CBI is really demonstrating God’s love and sharing the truth of His Word.”Earlier this year, Lisa D. Blystra assumed the leadership helm at the Kentwood-based Crossroad Bible Institute because of the ministry's ability to point prison inmates and ex-offenders to a better future through its Bible correspondence courses thanks in part to its worldwide partnerships with churches and affiliates.

"My love for marginalized people and my passion to have churches reach out and realizing what Crossroad Bible Institute is doing so well are the reasons I sought this position," said Blystra, who in September was unanimously tapped by CBI's board of directors to serve as the nonprofit prison ministry's executive director.

"CBI is really demonstrating God's love and sharing the truth of His Word," added Blystra.

CBI has an annual budget of $2 million and employs 21 part- and full-time employees.

Eyes were open nearly 20 years ago

Blystra said her eyes were especially open some 16 to 17 years ago when a family friend was sentenced to serve a four-year prison term at the Kinross Correctional Facility in Kincheloe, Mich., leaving his wife and two children to fend for themselves.

"My eyes were opened to the plight of the inmates and ex-offenders to the injustices that I saw, the lack of focus in helping people get better, and to the inhumane treatment of a human being," said Blystra.

While there, she expanded the church's 70×7 Life Recovery Ministries, a prisoner reentry program that connects Christian mentors to men and women. The ministry eventually became its own 501c3 nonprofit, which included broadening its partnerships with other churches in the greater Holland area. 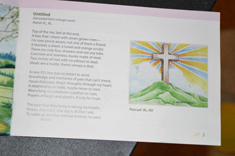 Every quarter of the year, CBI publishes Crossroad Journal of the Arts, a collection of inmates’ original artwork and poems.Liske tapped Blystra to serve as a vice president at Prison Fellowship Ministries, working as the director of church engagement and reentry. During her tenure at Prison Fellowship, Blystra was instrumental in expanding the network of churches involved in prison ministry across the nation.

Blystra said she was drawn to the position at CBI because of its capacity to empower churches to serve inmates through the power of the Gospel.

Realistically, that task is accomplished through its Bible correspondence courses, which is designed in three tiers, for a nationwide average of 30,000 inmates CBI refers to as students and another 4-to 5,000 internationally in six continents (North and South America, Africa, Europe, Asia and Australia).

Tier 1 is comprised of 14 lessons and Straightway Roadmaps that teach 30 key ideas intended help students discover the harmony of the Scriptures by examining God's unfolding plan of redemption.

CBI's 5,600 volunteers scores inmates' lessons, and then mails those scores back to them, along with a letter of encouragement and the next lesson.

Churches, CBI's affiliates and other inmates spread the word to other prisoners about the correspondence Bible classes they can avail themselves to.

"We have a long lasting partnerships with organizations working on the inside who refer us to inmates and inmates refer other inmates to CBI," said Blystra.

Blystra said her passion for the local church's potential to make an impact in the lives of people in prison will, in the days ahead, involve some internal evaluation of CBI's strengths and areas of improvement.

"My goal over the next year is to expand the number of prisons we're in and increase our efficiencies through new partnerships with parallel ministries," said Blystra. "We will also be develolping new curriculum, with a special interest in reaching the children of inmates and their families."
Author Information
Author: Paul R. KopenkoskeyWebsite:
About:
Paul R. Kopenkoskey is a full-time freelance writer and editor for an assortment of publications including Grand Rapids Magazine, Grand Rapids Business Journal, and Faith Grand Rapids magazine. He has completed his first novel with the working title, Karl Beguiled. He and his wife, Barb, live in Wyoming, Michigan. They have three children and five grandchildren.